We have a Samsung flat panel TV which hangs from the wall like a picture frame so it’s pretty difficult to read the back of the TV especially when trying to change connections. We don’t always have the Wii connected to this TV so I move the Wii and have to reconnect it using a 5 plug component cable. I seem to always forget the order of the plugs therefore I can’t easily reconnect it without visual access to the back of the TV. Google returned several bogus hits for this question so I snapped a picture with my cell phone (which was immediately uploaded to Picasa via G+, very cool) so here it is: 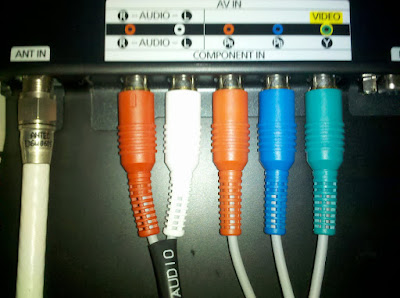 From left to right the plugs are red and white audio and red, blue, and green video. I’m sure there’s a great reason why the far right plug is green and not yellow but there you go.

Here’s a Google search to get you started $g(green vs yellow video plug).

Now, I only have to remember I wrote a blog post to recall the order of the connections.

All this week I’ve been in New Orleans at TechEd 2010 using the Google HTC EVO phone that I got while at Google I/O in May. The phone is on free service through Sprint for 30 days and is an incredible piece of hardware with an huge screen, very fast processor that’s been an absolute joy to use even though there are a few UI features/apps from the Droid I prefer. It’s going to be really sad to return to the Droid once the service ends as it runs circles around it.

The Falafel team here with six people has two Motorola Droids, two HTC EVO’s, one iPhone 3GS and one HTC Tilt 2. We taken tons of photos, many of which ended up being immediately posted to Facebook or sent via email. I’ve posted live streaming video to qik.com, photos and status updates to Facebook and Google Buzz, listened to podcasts, found directions to restaurants, coffee shops and all sorts of other locations, posted to Twitter read the news, posted updates to the Falafel team on Yammer, sent tons of free SMS messages via Google Voice, identified landmarks using Google Goggles, instant messaged via Meebo, tracked my travel via TripIt, connected to the web via Sprint Hot Spot countless times, scanned barcodes, installed apps and oh yeah, even made a few phone calls!

In fact, this afternoon I was working at a Starbucks connected via the Sprint Hot Spot feature sharing my connection with Falafel’s President John Waters while he was dialed into a GotoMeeting call with other Falafel employees located both here in New Orleans as well as back home in California.

Last night, we were walking along the Mississippi and caught Anderson Cooper filming AC360 where we watched the show streamed over a Slingbox to an HTC Tilt 2 located in Amarillo TX! It’s really amazing what these pocket devices can do and how close you can get to replacing a PC with one.

With Android you can literally pick up a new phone, log in with your Google account and be off in running with your contacts, email and lots of other goodness in minutes. I can’t wait to take a look at the new iPhone though I can’t imagine a case where I’d switch from Verizon to AT&T because at the end of the day I want/need to make phone calls.

As fun as all this has been, I’m ready to go home and see my family again so now it’s time to go to bed because I have to be up in a little over three hours to catch a 5:25am flight home.

I’m going to Google I/O this year and this just landed in my Inbox (highlighting mine):

Hi Steve,
This year’s Google I/O is less than 2 months away, and we’re very excited that you and over 4,000 other developers will be joining us in San Francisco. During the 2-day conference, you’ll have over 90 sessions to choose from and the opportunity to meet with developers from over 170 companies that will be demoing their apps and talking in-depth about their use of Google technologies in the Developer Sandbox.

As you might have guessed, Android will have a big presence at this year’s event. To make sure you’re equipped to make the most of your Android experience during Google I/O, we’d like to mail you a Verizon Droid by Motorola before the event.

Interesting they didn’t want to sponsor a Nexus One though kudos to Motorola. I’ve installed Eclipse and played around with creating an Android application an experience rather reminiscent of the old Win32 development days.

So now, what to do with an extra Droid? 🙂

I rarely see blogger’s, at least the one’s I read, talk about their Adsense revenue so I thought I’d throw this out there and see where it goes.

I’ve been blogging on my own domain since October of 2006 and one of the things I’ve experimented with is Google’s Adsense. I say experimented because the $1.80 in average daily earnings isn’t going to change my lifestyle anytime soon and I consider it a good day when it covers the cost of a mocha. When I think about it, Adsense is pure genius. Full stop.

Google didn’t do anything other than offer a tiny (and unknown) fraction of money it earns from these ad placements. Starting last May, through a new feature in Google Analytics, I started to gain some insight as to specifically which pages generate the most revenue and I can tell you it’s not what I typically what I blog about, at all.

In fact, if I wrote based on “Adsense appeal” I’d hardly ever write about programming or development. Looking at my “top” Adsense pages they are unrelated, detours I’ve taken along the way that have garnered Google Juice for some reason or other. I now believe Google could write a tool that would predict Adsense revenue for blogs posts in real time as they’re being written. Perhaps they could even auction posts while they’re being written and with the right feedback guide writer’s to higher revenue by suggesting links and images. I’m sure all this is possible yet seemingly corrupt or something close to it.

I wonder what the saturation rate of Adsense is throughout the web? I’d think Google must have an idea and therefore must know when they’re going to “hit a wall” in terms of being able to grow their Adsense revenue. On a different note, I’d love to know what, if any impact Twitter has had on Adsense revenue since many of the bloggers I used to follow have more or less given up on blogging and now write 140 characters or less which simply doesn’t interest me.

Note: Table of stats removed upon re-read of Google policy.

Based on data from Analytics I made a few changes back in November that seem to have boosted my ad revenue over the past three months and in November, I made my highest monthly total ever.

Here’s the translated version of a message my wife just left me on $g(Google Voice):

Hey it’s Christy and I was just calling to let you know that I got your message about the crap that’s great you sent us on regular tax, so that charge me $0.20 read that email and sent undoable voice stuff and I’m trying to keep costs down, and I was just at the mall and if you agree and I found. It’s Hughes. I’m going to get policeman boot concert just falling apart. 7. Excuse me one for called me and I have some pro, Bryce wake up them, they didn’t have them for like, say, but I’ve got happened to close and she’s got a bootleg mommy anyway. So anyway, I just wanna let you know. And it and hey, you’re looking forward to tonight if we can’t on screen gonna hit the mother just trying to run who will class who can run home and and I didn’t happen and bye.

My wife and I have three children (6 and under) and like all kids I know they love fire trucks. A few weeks ago with the kids sitting in my lap while looking at pictures on the computer they asked to see a fire truck so I browsed to YouTube and rather haphazardly stumbled into this video/song which the kids really enjoy. If you watch this video on YouTube you’re kids will probably also notice, as mine did, related videos with $g(Caillou) on the page and you may end up spending more time than you might anticipate.

Personally, I don’t frequent YouTube and have really only watched the occasional video as they arrive in email or via Facebook but recently I’ve found other fun YouTube videos the kids have really enjoyed:

Be sure to catch the train surfer and if you fly frequently you might want to skip the last one as will likely lead to ones like this. Come to think of it I think I had one of these landings in Scranton during this trip.